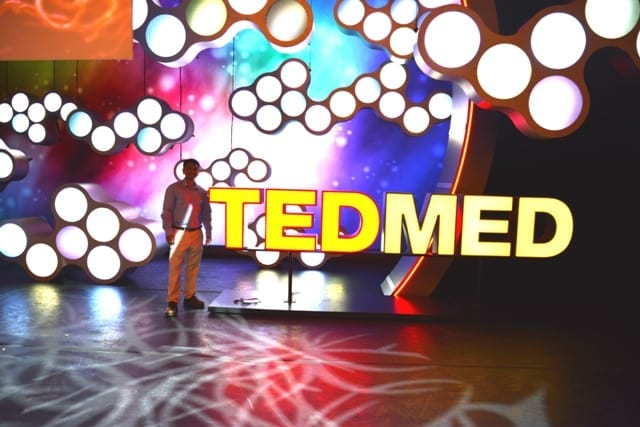 Inspiration. Imagination. Innovation. Integration. These are but a few words which would adequately describe the TEDMED experience. An eclectic collection of scientists, innovators, thought leaders, and artists were invited from around the world to share their ideas about how the world is and how we can make it a better place.
I was initially nervous as to who I may be running into at any given moment. Walking down the hallowed halls of the JFK center for Performing Arts, I was not sure what I was getting myself into. I soon found out.
The opening night appetizer started off with a spectacular solo violin performance by Kishi Bashi followed by a standing ovation for Latin activist Dr. America Bracho. It didn’t stop there. The next few days were filled by other masters in their fields headlined by Michael Porter, a business world legend on corporate strategy and his views on healthcare. A somber yet real look at cancer by Dr. David Angus was inspiring. The tap dance rendition by the Manzari brothers demonstrated the miracle of human physical potential. Not to be out done, Richard Simmons, the legendary fitness icon, gave a rousing fitness routine that even the US Surgeon General, Dr. Regina Benjamin got into. This was just a small sampler of the exquisite TEDMED entrée.
In between the TED talks, I was able to venture into the “Hive”, a place where “busy bees” aka future innovators showed off their various toys and gadgets which may someday be used on a more routine basis. I was able to get a complete health physical via an iPhone. This included VO2, EKG, direct ophthalmic exam, and a carotid US exam to name a few. Kaiser was able to show off their health “robot” where many curious onlookers congregated.
The icing on the cake though was the opportunity to meet new people both from within all over the healthcare field. Although one could certainly experience TEDMED through online video feeds, it was the human interaction which made it all the more worthwhile.